Specialists in Classic and Contemporary Jewellery

Jewellery should offer you timeless beauty, elegant craftsmanship, and memories to last a lifetime

We are a proudly family-run business, and having been around for 40 years, we are entrenched in the industry and in the community.

We’re incredibly proud of our past and having deeply embedded relationships with our customers and suppliers. But we’re also continually embracing the new, whether it’s discovering incredible trends, or finding a way to make our customers smile, we are always growing and evolving.

So, whether you are looking for a timeless classic piece, or a contemporary addition, we can offer you a full range of jewellery.

We are a trusted and reliable team and ensure that your pieces are in the safest hands when you leave them with us for a polish or repairs. 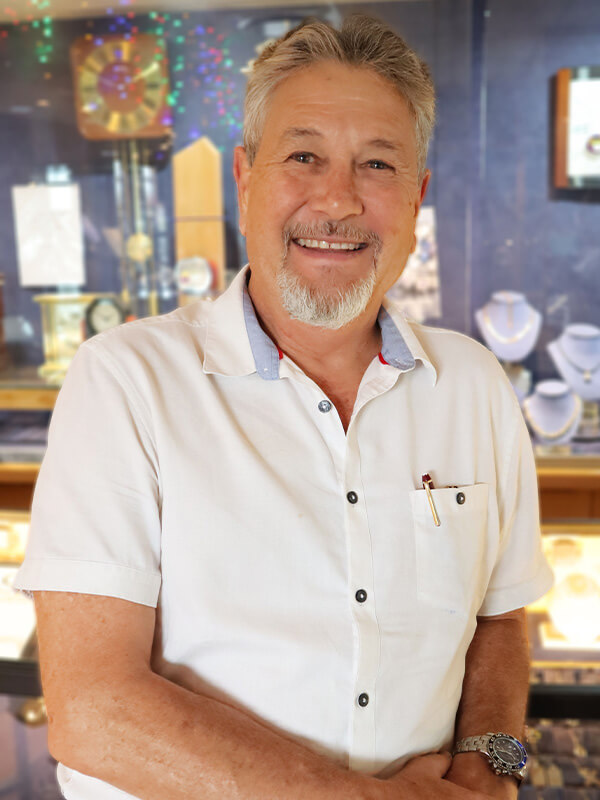 The jewellery trade saw the arrival of Rudi Campbell in the late 70’s when he joined a company called Transvaal Tiger’s Eye, sourcing and locating coloured gemstones. He joined Gerald Francis Jewellers in 1983 as a sales assistant, planting the seed for what was to become a long and illustrious career in the trade. The two owners at the time, Roger Francis and Gerald Fearnside, noticed a passion in the young man and swiftly took him under their wing.

A couple of years later Gerald left the company leaving Roger as the sole owner. Roger and Rudi worked very well together and in 1988 Roger offered Rudi 50% shares in the business. At the time Rudi could only afford 10% but he now had a foot firmly planted and was on his way to making a respectable name for himself in the trade. Roger and Rudi worked side by side for the next few years until 1994, when Roger decided to emigrate leaving Rudi as the sole owner of Gerald Francis Jewellers.

Now, with more than 40 years experience in the trade, Rudi is, quite comfortably, a master at what he does. With an uncanny skill and a keen eye for jewellery design and manufacture he has the ability to visualise a creation before it comes to fruition. Experience earned over so many years has given Rudi the knowledge to advise you on the best possible course for your original idea and he will guide you effortlessly to an end result that is sure to please.

Rudi is a holder of the GIA (Gemological Institute of America) diamond grading certificate. He is also a qualified jewellery valuator, holding the certified valuator certificate earned through the Gemmological Association of South Africa. 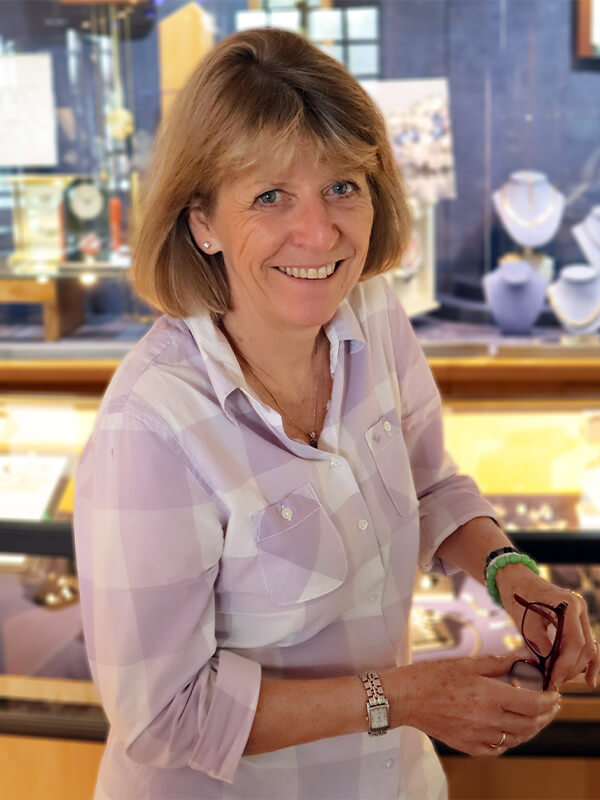 Sheila kicked off her career working at London’s Charter House street as a rough diamond sorter. She arrived in South Africa in 1983 and joined Gerald Francis Jewellers in 1985 sparking a 37 year tenure with the company.

Sheila is an admin wizz and she has been invaluable to us in keeping the business running smoothly but her talents do reach further. She is experienced in jewellery valuating and has a talented and creative eye for design.

Sheila is a holder of the certificate in diamond grading earned through the Gemmological Association of South Africa. 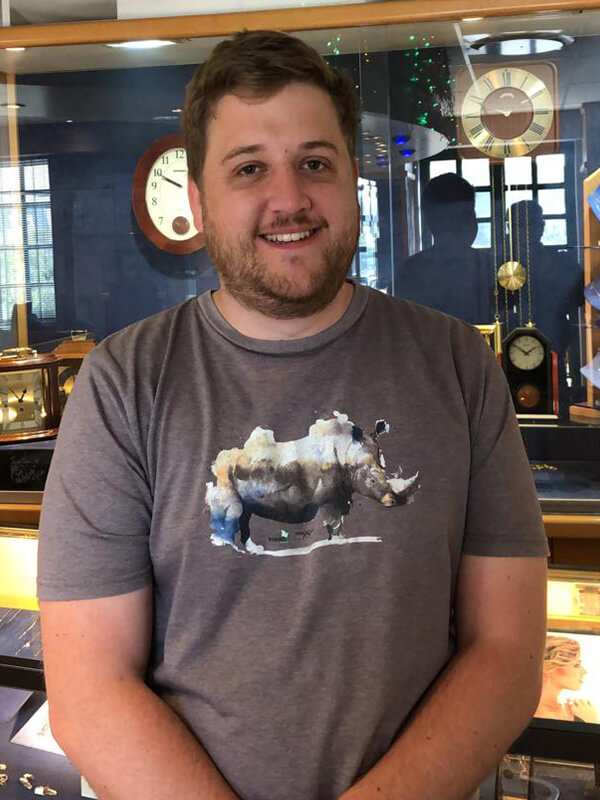 Rudi Travis started working at Gerald Francis in 2015 following his years of being a guide on a game farm in Lydenburg. Initially, he worked in the front of the shop as a retail assistant where he found his passion for jewellery.

In 2017 Rudi began his journey in becoming a goldsmith, by studying jewellery manufacture and design at TUT. This 3-year diploma covers an array of teachings regarding the makeup and design of jewellery. It is also a platform to start an internship and thereafter gain a trade qualification.

After qualifying at TUT and achieving his diploma, Rudi did his internship at Rare Earth creations specialising in stone setting. After two years, he became qualified to set stones in jewellery and does so under a microscope, which is very specialised and not common practice in South Africa.

Now a full-time goldsmith and stone setter in the Gerald Francis Jewellers store, Rudi aims to achieve his trades qualification.

Rudi is also learning the ropes from his father Roelof (aka Rudi) and hopes to be able to live up to his dad’s reputation in the jewellery industry. 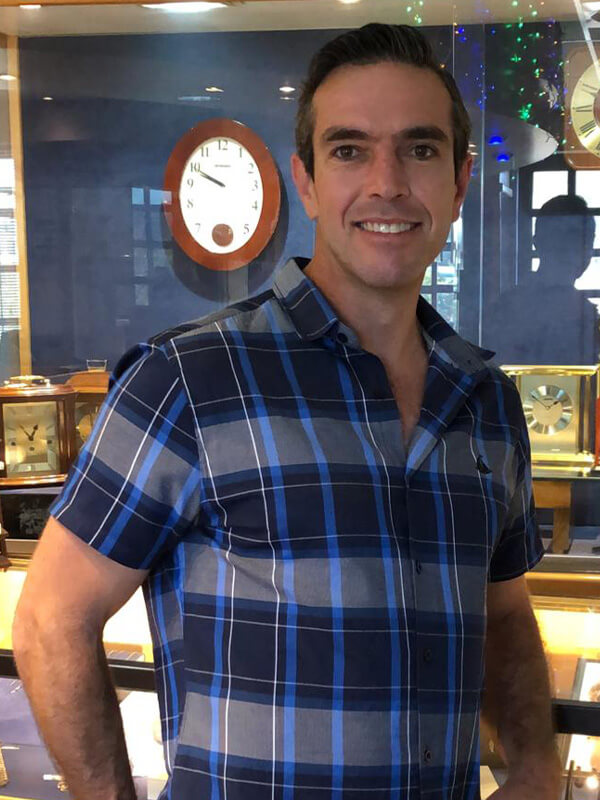 Born into the world of gemstones, Craig followed his father’s footsteps to become a Gemmologist.

He began his apprenticeship in 1996, and after working in various workshops, took his trade test in He then went on to complete several courses offered by the Jewellery Council of South Africa on coloured gems and diamonds.

He continued to work as a goldsmith, managing workshops and then 2 years independent. In 2011, he gained his Gemmological Diploma and became a fellow with the Gemmological Association of Great Britain.

Since then, he has received a B-Com degree in Business Management through UNISA and in 2014 started up the African Gemmological Laboratory. He also gained his Gemmologist Diploma through the Gemmological Institute of America, which he completed in 2019.

Craig strives to continue learning and growing in the industry and is honoured to be a part of the team at Gerald Francis Jewellers.

Want to be the first to know?